So, we are in the midst of planning and fundraising for a comprehensive preservation and access program for the library. In the meantime, there is a mandate to start scanning everything we own. We have a couple of very dedicated volunteers, an Epson scanner, a computer and a RAID. And me. No adequate database, no money to make one, still researching what to get and how it will integrate with library and museum automated systems and OCLC. I’m following up on an earlier post’s comment to look at some open source stuff. And we’re looking at which NHPRC, NEH and IMLS grants would be best to go for. Very little intellectual control – for instance, just the other day, while looking for documentation of an 1868 first ascent of Long’s Peak, I came across some lantern slides of a rare SES Allen map of Lake Louise that another patron had requested. Neither of these items are documented in our archives lists at all.

But still, there are people who want to see what we’ve got, right now. I am happy to announce that we now have a way to get small numbers of things into the eager eyes of climbers everywhere. Our intrepid volunteers have scanned about 100 slides from the Lt. Nawang Kapadia Himalaya Collection, donated to the AAC by Harish Kapadia. I used Picasa to gather up the tiffs, do some QA and make them into jpgs, and added a Flickr Uploadr button to Picasa. And following in the giant footsteps of The Commons project, we started a Flickr page for your viewing pleasure. And then backup to the RAID. 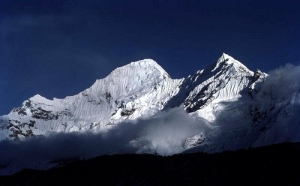 There are about 1500 color slide Kapadia photographs of various peaks and people of the Himalaya. I am hoping to spend some time networking in the flickr climbing community so that we get a bunch of tagging and commenting action, leading back, eventually to Google Earth, our OPAC, and other social networking stuff. Check back on the flickr page to see more as they are slowly scanned. It takes about an hour to scan and QA 15 slides in a matrix. Someday we’ll get a slide stack loader and a Nikon Coolscan, and we will be faster. We’ll also be scanning our collections of lantern slides, film negatives, and photographs – as usual – all mountains, all the time. I’m looking forward to seeing what we’ve got!

I just wanted to check in with everyone who reads this blog, to let you know it is not dead. I do plan on posting all kind of things related to preservation and conservation. It’s just that I’m still trying to figure out where things are and how things are done at the AAC Library. Note the chunk of Matterhorn on the floor at the far right of this picture.  And the fireplace in the distance.  It was functional till just last month!  I’m pitching for a video fire to replace it.

I’ve completed my second week of work and am busy mulling over preservation and access priorities. The collections need all kinds of attention all at once, and there is a lot of interest in the materials from many fronts. I’ve answered reference questions about: the best time to go helicoptering in Patagonia; how to find a climbing guide in thy Pyrenees; located topo maps of the Lakes District so a researcher can connect the poems and the altitude gain; found alternative expeditions to Tibetan routes closed due to the political upheaval; and located a 3/4 profile portrait of Sir Edmund Hillary so an artist could sculpt a trophy.

I’m developing a presentation for the Friend’s group on our publisher’s bindings, many of which have really interesting mountain-related designs – I plan to scan the covers and post on the Library blog at some point. Here are a couple not-so-great pics to whet your appetite:

And then there are the issues of a poorly functioning HVAC system, a shelving construction campaign, the magnetic and film media that desperately needs attention, and the development of a digitization program. And cataloging. The upcoming AIC Angel’s project. Starting a book repair program. Fundraising. Having a long range plan in hand is unbelieveably helpful as a starting point for my own planning, and as a method of communicating the issues to other departments. It’s all pretty exciting and challenging and interesting. Stay tuned!